Saxon Way to Save Relationships 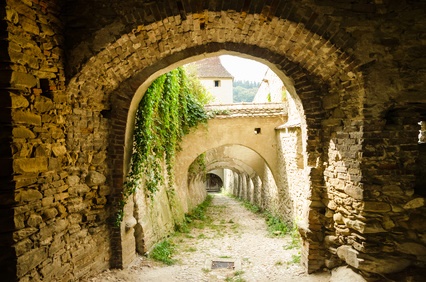 Biertan in Transylvania, Romania shelters in a peaceful valley around an ancient fortified church. This was once the see of the Saxon Lutheran Church from 1572 to 1867, and hence the home base of the bishop. Other nearby towns resented its thriving market place, and so the church doubled as a fortress. In those days divorce was bad news, and could result in excommunication from community and church. To prevent this, bishops locked couples with failing marriages in a tiny cell for six weeks, to allow them time to irons things out. Apparently, sharing a single pillow, sleeping in a child’s bed, and having a single set of cutlery usually did the trick. The BBC quotes the current priest, Ulf Zeigler saying, “Thanks to this blessed building, in the 300 years that Biertan had the bishop’s seat we only had one divorce.”

Perhaps the couples agreed to get on better to avoid a repetition of the sentence. It certainly was the opposite of trial separation. We gather most couples voluntarily applied for the ‘privilege' of staying in the marital prison. And to think Auger thought Count Dracula and the Rocky Horror Show were the main high spots in a Transylvanian tour.